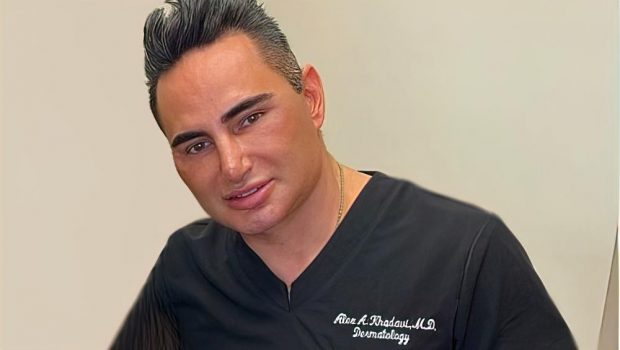 A prominent WeHo dermatologist is feeling the burn after yelling homophobic slurs at his gay neighbours.

Dr. Alex Khadavi – who looks like he took anesthesia and then operated on his own face – has been caught on camera in natural homophobic state, with TMZ claiming to have seen the footage.

The concierge repeated the slurs to the couple who then filed a restraining order.

And would you believe it’s not baby’s first hate-slur?

According to Page Six, Matt Altman of Million Dollar Listing also filed a restraining order against Khadavi in 2016.

Khadavi reportedly told him he “hated Jews” and wanted to murder him at a real estate event. Talk about mood killer.

“Not only is Alex Jewish, he had a bar mitzvah!”

Yes, because the removal of foreskin also eradicates bigotry.

“Alex Khadavi is a very well-respected businessman,” they continued, “and was an invited guest of the real estate reception which he attended with his contractor, who is Jewish, and his interior decorator, who is gay.

“A restraining order has not been served.”