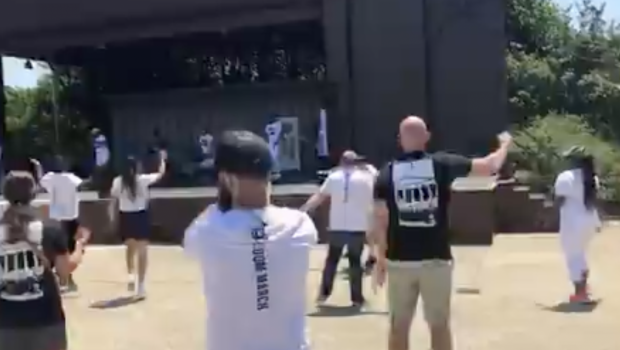 “Ex-gays” marched on Washington and literally no one cared

A group of *ahem* “ex-gays” decided to rally against the Equality Act by marching on Washington DC last weekend. And while it looked like they were social distancing, it’s just because nobody came.

It’s okay to laugh at this one, huns – we haven’t stopped, tbh. Even Trump can boast a better turnout than this shitshow.

According to LGBTQ Nation, the “ex-gays’” “Freedom March” rally (which kind of looked like a 60+ water aerobics class without the swimming pool) attracted a lot of confused attention from passers-by and a disingenuous, lethargic response from LGBTQ+ press – case in point.

Press (we assume a Karen with an iPhone6) for the event described the rally as a “diverse group of former LGBTQ individuals in worshipping, sharing our testimonies, and celebrating freedom in Christ publicly on the Mall in Washington.”

We’re pretty sure ‘freedom’ covers getting railed by whatever gender you want.

The rally was connected to CHANGED – a group of people claiming to have been “cured” of their queerness through Christian conversion therapy. According to founder Elizabeth Woning, members of CHANGED identify as “Christians with LGBTQ in our past. Many, like us, have changed. We left LGBTQ because we wanted to.”

In a statement about the bizarre rally, Woning said: “CHANGED has come to DC to appeal to Congress to focus on human dignity, not identity politics.”

Footage of the rally by The Washington Blade showed a handful of people dancing to a live band – all looking like they’ve lost a bet.

Although from the looks of some of those shorts, maybe they are straight now.