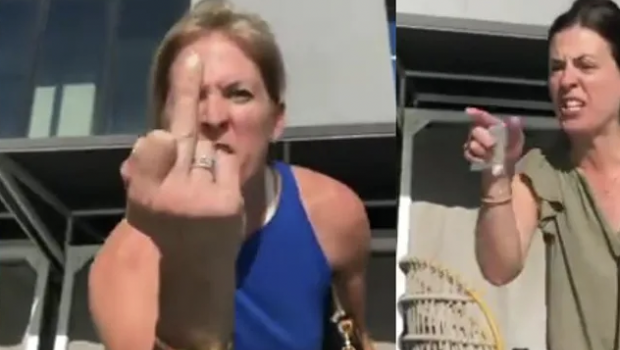 A crowd came to the defence of a black queer couple who were accosted by a group of white Karens for kissing in public.

Pissed off Karen’s caught on camera? Groundbreaking. Kidding – we love to see it and we love to see these huns get exposed for the trash they are online, ’cause the internet is pretty efficient at getting said trash to the curb in time for pick-up.

The assembly of homophobes came for the black queer couple who were simply kissing one another by a hotel pool. They began profusely shaming the pair, telling them that there were “children present”.

Those poor kids; you just know they’re the type that would really benefit from watching Bambi’s mum die on screen a couple of times.

Now, here’s where this story turns into some sort of modern queer fable.

The crowd at the pool quickly jumped to the couple’s defence and starting chanting “SHAME” at the Karens until they left the area – who were visibly fuming at their public shaming.

Alongside a video of the incident, Instagram user artkigalos posted: “This woman asked a female couple to stop kissing in a public pool because her kids were present. So we gave her the Cersei Lannister treatment while they were escorted out by security. SHAME!!”

Possibly the best part of the whole story coming up… one of the Karens tried to fight back against the crowd, arguing that she can’t be racist because she’s “Hispanic” and “lives in Oakland.”

Unsurprisingly, that didn’t turn public opinion around and now the video has gone viral. Maybe nature is healing.