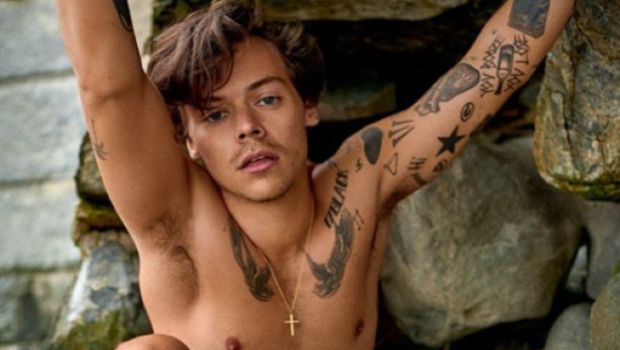 Fans were extremely excited to hear that former One Direction-er Styles would be taking up the role, and representing his own queerness.

Since then, it’s be announced that Burgess will have gay sex in the film, and now that Harry plans to play that methodically.

Apparently, the film will contain two sex scenes and one where Harry is nude on his own, and we really can’t feel that directors know exactly what they’re doing.

The insider added, Harry is “really excited about the challenge.” We hope *really excited* is stage direction for his todger.

Despite the smutty jokes, fans are confident the film will be a hit, and even the plot line has echoes of Brokeback Mountain:

In a post-war and pre-woke Brighton, school teacher Marion falls for her best friend’s brother Tom (Styles). Tom – a policeman – marries Marion despite being in love with Patrick (David Dawson) due to 50s attitudes toward homosexuality.

A photo that reportedly “leaked” of Harry Styles forced the singer to deny it was him, (although pal Ed Sheeran said it was real). Styles, you know what the fans want… *hard* evidence.

See more celebs in their nude roles at Mr. Man.