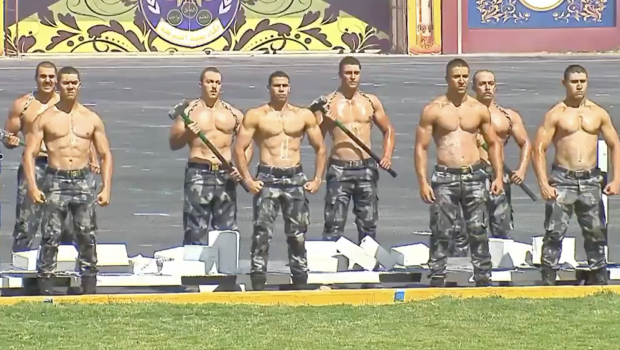 You wouldn’t expect homophobic people to be so comfortable with homoerotica, but yet, here we are again; penning an article on how a homophobic leader likes to watch half-naked men writhe around on floats and flex their muscles.

Honestly, it might as well be Egypt Pride 2020. The only thing missing is glitter. And actually, if you watch the video, you’ll notice the last time we saw this kind of car-top parade was when the Spice Girls performed at the 2012 Olympics.

Out and proud Star Trek star George Takei wrote on Twitter: “For a terrifyingly homophobic and dangerously anti-LGBT government in Egypt, this screams pretty gay.”

According to reports, the cadets “demonstrate their physical abilities, showing the superiors a series of stunts such as climbing the facade of a building, doing push-ups or breaking concrete blocks.“

That’s before their synchronised choreo to Born This Way. All the while, superiors, such as homophobic president Abdel Fattah Al-Sisi, lick their lips. At the cadets abilities, of course.

Egypt previously have denied the existence of LGBTQ people to the United Nations Human Rights Council. Queer people and sexual acts are punished under decency laws, whereby perpetrators receive up to 17 years of hard labor, fines, or deportation. Torture, beatings, and executions are also tolerated with police being complicit, joining in or turning a blind eye.