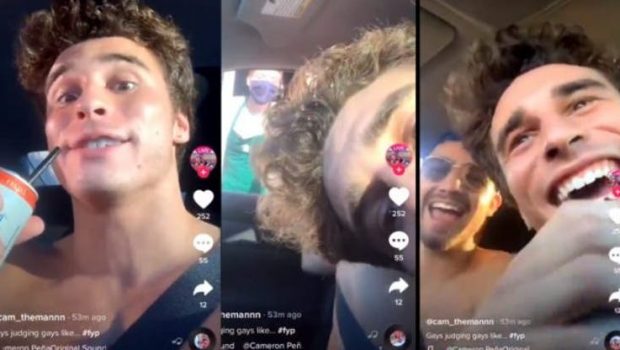 “You can’t be homophobic and gay” low-intellect people will argue, but you can if you hate yourself.

One chiseled queen, in particular, perfectly demonstrates how you can inflict homophobia on others members of the community while being gay yourself.

“We’re gay,” said Cameron Joseph Peña in a recent video, “but this dude at the drive-in window at Starbucks is gayyyyy.”

He then pulled up to the window, where a polite barista handed him his coffee for his trash mouth and told him to have a nice day.

Clearly, a nice day to Pena, is attempting to humiliate the barista.

Following a backlash to his post, Pena eventually issued an “apology”. (Here’s a fun little tip when it comes to public apologies: if it’s written in their iPhone notes, it’s probably not that genuine).

And someone was quick to point out that he was on the phone while writing it… his parents, perhaps? Sounds like the kind of apology from two cr**kers that gave their child pocket money without teaching him ethics, empathy, or kindness.

sis was someone telling you what to type on speakerphone pic.twitter.com/kJdrAhJn7j

We – like many others – are curious what his intentions were if they weren’t “ill”? Did he think doing this was going to make the boy feel good about himself? Please.

His attempt at being ‘more self-aware’ has fallen flat already, after another video surfaced of him referring to the backlash as “dramatic” and “bitchy”. Typically privileged.

He later admitted his own internalised homophobia, but thinks that everyone has it…

THIS YOU? “Doesn’t everybody have internalized homophobia” pic.twitter.com/c1m8zhGiTK

Honestly, who gets off on mocking their own community? So sick of these privileged “masc” gays and I’m gonna say it louder for the toxic queens at the back: Having a deep voice doesn’t make you any less gay when you still take dick up your ass.

TRASH. He’ll be on holiday with Aaron Schock in a couple years.