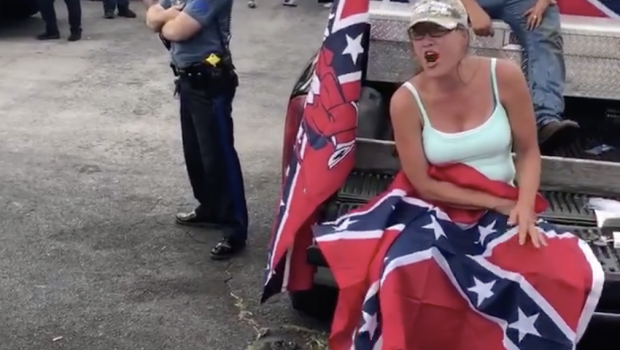 Well, this is a new one.

A ‘Confederate Karen’, who waved the hate-representing flag at a Black Lives Matter protest while shouting things like “KKK belief” and “I’ll teach my grandkids to hate you all” has claimed she blacked out during her racist ramblings.

But she looks extremely coherent in the clip…

Kathy Jenkins told local news station KOLR10 that since the video went viral she’s lost her job and has moved out of Branson, where she’s lived for the last six years.

She said “I must have blacked out” regarding those racist remarks, and claims she “didn’t understand” the confederate flag represented hate.

“I don’t understand the whole history of the Confederate flag, but I’m learning,” she continued.

Jenkins went on to say that she was heckled as ‘racist’ by BLM protestors for holding the flag, and claims:

“I wasn’t saying I’m KKK or for the KKK. I was mocking them because I don’t like being called a racist.”

“I’m so, so sorry. I mean, if it would help for me to stand with Black Lives Matter, I absolutely would do that.”

Help who? You? No ma’am. If confederate Karen wasn’t racist she would already be standing there.

Faith Pittser, organiser of the protest in Branson, calls bullshit:

“She knew exactly what she was doing. She was there from the start on the counter-protesters’ side shouting obscenities and hateful words at our protesters. I think her claims to not know what the confederate flag is and what it represents are absurd and lies. She proudly shouted “KKK belief” in front of all of us.“

“Her apology does not make sense as she’s trying to state she didn’t realise she was on the opposing side. How do you not realise that if you’re on Dixie Outfitter’s property holding a confederate flag along with the other counter-protesters that are facing us? She never once shouted ‘black lives matter’ along with us. This woman is lying and apologising because she’s sorry she got caught in her acts of racism.”