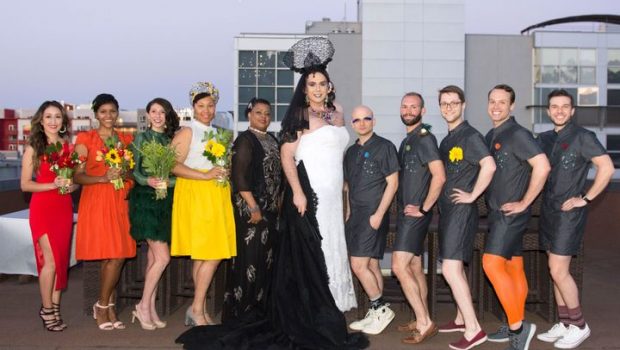 Drag Queen Takes Out £20,000 Loan to get Married to Herself, Gives Zero Fucks 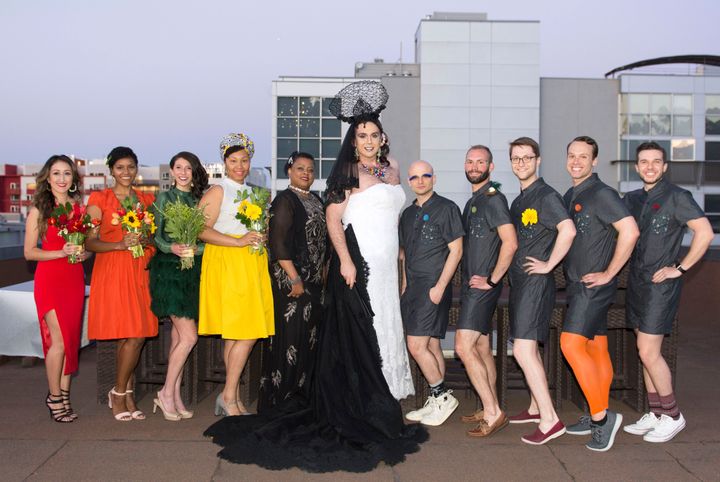 A drag queen has detailed how she took out a big fat loan to marry herself and has no regrets.

Lasy year in May, James Hilton Harrell walked his alter ego Diane A. Lone (geddit?) up the aisle, wearing an eight-foot black train in a romantic ceremony to herself, where strippers delivered pizzas to the reception and the rainbow-coloured Bridesmaids spray-painted the bride as part of the vows.

James Hilton Harrell writes for HuffPo: “Prior to my wedding, I was in a bad emotional space. I had gone on countless dates and gotten loads of feedback informing me why I was inadequate. I was told that my voice was too gay, my body too fat, too hairy or not hairy enough. I kept trying to make myself into someone else in the hope of pleasing a Tinder match, but, ultimately, I just ended up losing more and more of what made me myself.”

After his period of disastrous dates (also known as life), Harrell received a “well-timed” email ad asking if he needed a load for anything… like a wedding. Well, why the fuck not, thought single pringle, Diane. So she applied for one, and to her surprise, actually got it. And just like that, began to plan a wedding to her alter ego. 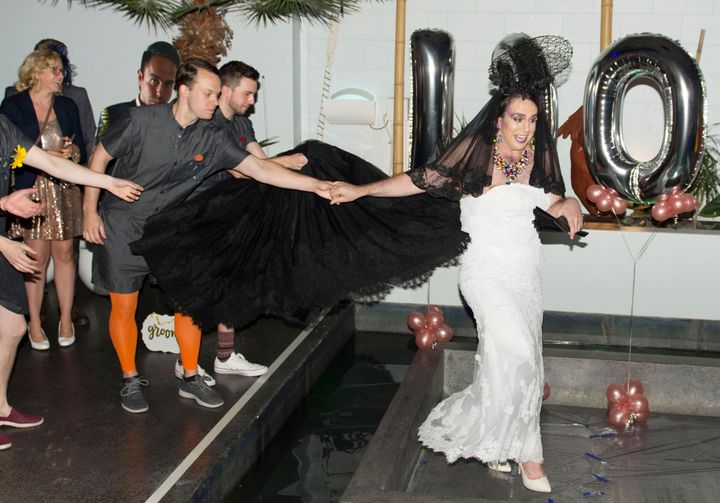 And before long, Harrell was posting invites out to his friends, where he’d been caricatured as a martini-drinking, snack-scoffing, fabulous (question mark) groom/bride-to-be! While some were confused about a drag queen getting married to herself, Diane had generously crafted a ‘robust’ FAQ on her website, while most others were wholly supportive.

“Standing nearly 8 feet tall from heel to headpiece, I have never felt more seen or better understood by my friends than on my wedding day. My friends, dressed in their boldest versions of eleganza, spent that entire night showering me and each other in love, positive affirmations and joy.”

However, Diane’s high was short-lived, “one question I hadn’t considered as I began this journey was: What happens when the honeymoon is over?” And as she was to find out; all her friends went home, and Diane went back to filing expense reports. “The whole night seemed to have gone by in an instant. Shouldn’t $20,000 buy sustained enlightenment?”

But once he began dating again, James found that his luck had changed, and he praises getting more follow-up dates on his self-marriage. “I was ― and am ― now an individual able to embrace their masculine and feminine identities and I have a group of people who love me no matter how I look or feel.”

Adding, “My wedding might have been expensive and, at times, stressful but it was the best choice I could have made for myself, and I have no regrets. Getting married to myself reminded me that because I have so many friends and such a strong community, I’ll never truly be alone.”