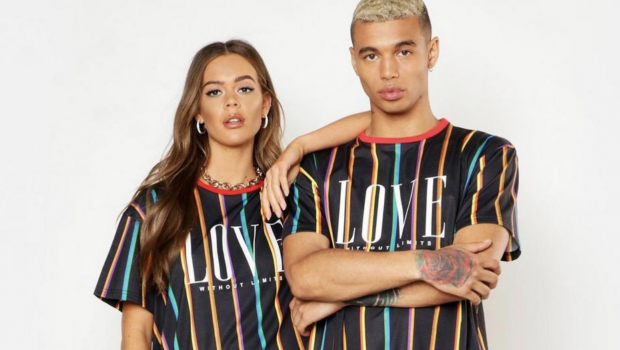 Pride is literally around the corner, (unless your Birmingham in which case it’s just over your shoulder), so we’ve rounded up the companies supporting the LGBTQ community with Pride merch and donations to LGBT charities. Kings of co-ord, (or should that be queens?) BooHoo Man are back with a bigger pride collection than ever. This year you can wear equality from head-to-toe; literally, from caps through to sliders. Their ‘Love Without Limits’ line aims to be even more inclusive, offering gender-neutral trend-led items of 90s prints, acid wash, stripes, and top/bottom combos – so a very versatile range. 10% of all profits will be divided between the LGBT Foundation and OutRight Action International. Jean-giant Levi’s have kept their Pride collection simple and statement for 2019; from subtle rainbow accents on their signature denim to fully flag-covered undies. They’re 100% of the profits to OutRight Action International, working to advance human rights for LGBTQ+ people all over the world. We live for this simplistic line from Ralph Lauren, which puts their rainbow-washed logo on plain polos, jumpers and t’s. And Ralph Lauren have recruited fit Olympian Gus Kenworthy to fill them out; as much as love the designs, we’d equally love to see him whip them off. RL are donating 50% of the proceeds from the collection to Stonewall Community Foundation, benefiting an international network of LGBTQ+ organizations. Girl, this is not even our usual style, but we are here for this fluffy sliders from Ugg which represent both the gay and transgender flag. They recently dropped these colourful sets for Pride season, and while we won’t be wearing them to the parade; (too many clunky-foot bitches steppin’ on our toes), we will be sporting them to Brighton. 25% of the proceeds going to the Born This Way Foundation. Retailed at Urban Outfitters. If anybody knows how to make a statement, it’s Billy Porter. So we’re not surprised that Todd Snyder and Champion have teamed and recruited him to sport their collaborative collection. In honour of the 50th anniversary of the Stonewall uprising, Porter – along with other courageous equality pioneers – sport the fun designs. 20% of sales will be donated to the National Park Foundation to support Stonewall National Monument. Twerking Climate Activists Turning Up the Heat in DC NSFW: A Glimpse into ‘Beach Rats’ the Film About Cam2Cam and Cruising FAGONY AUNT: My Boyfriend Doesn’t Want Sex, But Makes it My Fault