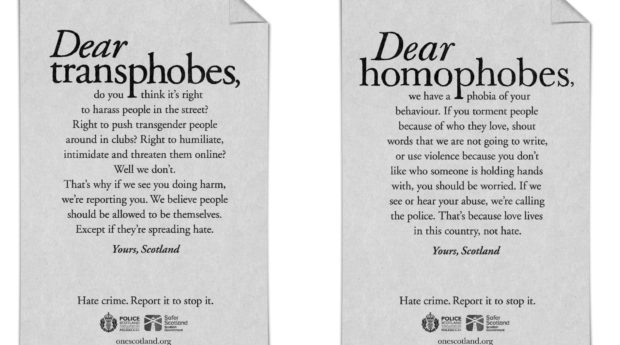 Scotland has reputation for having lower tolerance levels to minorities than the rest of the UK. And so it makes sense that the Government would finally take steps toward fixing that.

Statistics from 2015/2016 show that Scotland only had a few hundred fewer hate crimes that the entire of England and Wales.

These ads confront homophobia, transphobia, racism, and ableism have begun to appear across the country, as part of the One Scotland acceptance campaign. In letter-form, the ads address haters directly:

“In the last year there were over 5,300 charges of hate crime reported to the Procurator Fiscal in Scotland. However, there are many more incidents that go unreported. We all have a responsibility to report hate crime if we witness it – it’s the only way we can challenge it, and put an end to it for good. There’s no place for hate in Scotland. Report it to stop it.”

Henrietta Mochrie, a repeat victim of a hate crime, weighed in:

“I’ll often get street harassment, sometimes this has escalated to the point where I’ve been followed by people shouting abuse at me, just because of who I am. It makes me feel really down and scared to leave the house. It’s important that if you witness hate crime that you report it to take a stand against hate.”

Well, we’re glad that Scotland are finally joining us in the 21st century, and kudos to the officials behind the campaign!