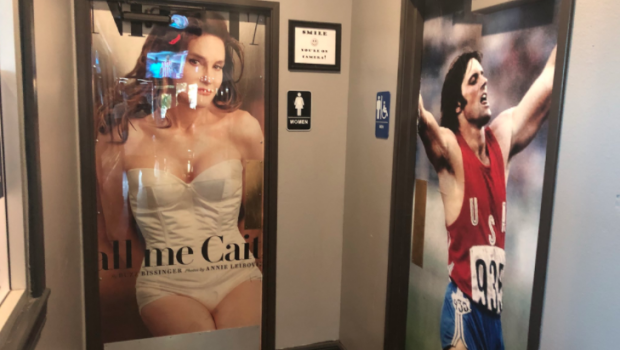 Dodie’s Place Cajun Bar & Grill in Dallas has come under fire for using snaps of Caitlyn Jenner, pre and post-transition to identify the gender bathrooms.

DiFurio said he “wouldn’t consider it a particularly great place to be LGBTQ.”

HuffPo writes: Using Jenner’s photographs in this way trivializes the internal struggle and gender dysphoria many transgender individuals face. Being transgender does not mean that someone was simply once one gender and is now another. Their emotional, psychological and physical experiences are far more complex than these bathroom doors could ever reflect.

Although the responses have been extremely mixed. Many identified the posters as transphobic:

While most saw the funny side:

While others thought it may actually be beneficial to the trans community:

It would seem to imply that trans ppl would be able to use the restroom of whatever gender they identify with. That would be progressive!

And then there are those that used the news to unleash their own ignorance:

Poor women.. where is the ladies room ???…I see two men on doors one with longer hair