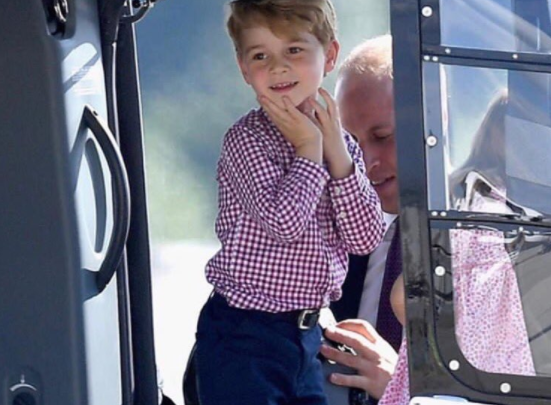 Last weekend photos hit the web of Prince George posing in a helicopter, and remarks made online went straight to how effeminate he looked.

When we initially heard that people had been commenting on Prince George’s (just four years-old) sexuality, our first thought was: ugh, just leave the kid alone, he’s a child! Why is this even a discussion? Let him grow up before you start trolling him at the very least.

But after seeing the tweets, (that mostly came from other gay men), you can quite easily read that they’re comments were either in jest, or complimentary. Although, naturally, it has drawn a response from some very unhappy trolls.

Prince George is already a bigger gay icon to me than Boy George. pic.twitter.com/i1FM0jh4Vv

Prince George is definitely going to be gay ??

I hope Prince George turns out to be gay

Personally, we don’t think that the commenters meant any harm, and if anything, were probably just excited at the prospect of having a gay king. But a number of people stepped forward to claim it made them feel “uncomfortable”. But is that discomfort their issue? Or that of the initial tweeters? It’s a tough call, as there’s clearly a need to protect the innocence of our children, but if the comments only come from a place of love and/or positivity, then is there really any harm done?

Although to be fair, it would probably help if Prince George wasn’t dressed like a gay lord, and posing ever so slightly pedophilic.

One opposer even claims that these kinds of comments are “sexualising” a child. HMM, well if you think being gay is all about sex – then you belong at Tel Aviv Pride, bitch.

These tweets about Prince George being gay is sickening.
He's four years old you nonces.

V v uncomfortable with all the people sharing that photo of Prince George and calling him gay. You're sexualising a four year old…?

Although we think this reply Tweet does a good job of demonstrating the place that most of the gays were coming from: hindsight.

it's not really homophobic if i think being gay & camp is positive. i like this photo because i see my young self in it

Thoughts on a postcard (or in the poll below) please Cock Flock!