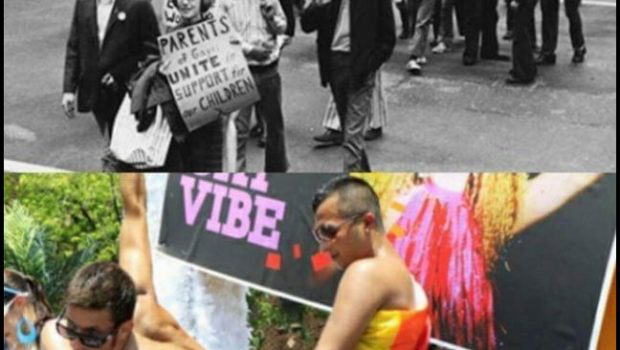 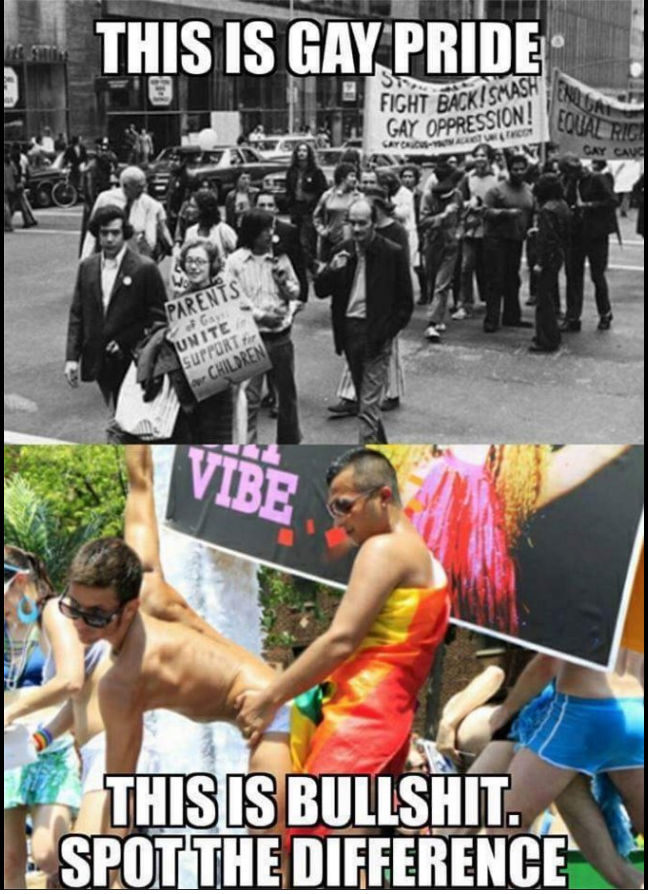 THIS is the meme regarding Pride that’s had conflicting opinions from the gay community. The image compares two very different looking Pride parades; the first from back in the day when they are marching to combat “oppression”, while the one below was taken much more recently, and shows two guys celebrating by dancing (possibly on a float).

“This is Gay Pride” states the top photo, and “this is bullshit” states the one below. Quite a harsh statement, and it’s obviously something people are never going to agree on. But obviously we thought we’d put our two cents in, and we wanna hear your thoughts on it too.

Plenty are agreeing that the second photo is depicting an inappropriate style of dance – nothing to do with the fact that it’s two men, and that it would be just as inappropriate if it were a man and woman. While the other side argues that people should be allowed to celebrate however they wish, and that we don’t see anything less provocative in modern music videos.

What some people don’t realise is that Pride has changed – we have evolved and grown – and we have more rights now than we used to. In developed countries, many of the younger generation have no grasp on how important Pride marches were. And because there is less to fight for, the event itself has become less serious. I’m not saying that everybody should watch or march in the parade, because unless you’re on a float I personally think it’s boring as fuck. You can be gay without marching, the same way you can be Christian and not go to church. So two events, 30 years apart, are never going to look the same. And in the bigger scheme of things, that’s actually a good thing.

With regards to the second photo – the same way you can be gay without marching, you can be gay without simulating penetration in public. That’s not to say that these two guys are in necessarily in the wrong, but personally I think it’s a little too hoochie for daytime public celebrations. Save it for the club. If someone approached me from behind to dance like that, I’d politely decline, offer an awkward half-smile, and step to the side.It doesn’t bother me seeing it, but I wouldn’t do it. But then again, I wouldn’t wear a rainbow flag wrapped myself either (apart from that one time I did that).

The thing with this, is it’s all well and good to claim “sexual freedom” and all that feminist-type bullshit, but don’t then turn around a whinge about gay people being stereotyped. Pride isn’t an event that needs hyper-sexualized, but because we live in a culture that promotes it, what do you expect? I think, wear what you want, it’s Gay Pride, and if you wanna express yourself by wearing a skimpy little outfit without getting harassed on the streets, then do it – I know I did when I was younger.
But the problem I see, is that this has evolved to people wearing jockstraps and the like, on road – which is fine for Folsom Street Fair, but people should be able to distinguish the line of acceptable public decorum. But that’s always a grey area, because people have different ideas of what is acceptable and what isn’t – especially over different generations. This one’s tricky, because at the end of the day, they are only dancing, and if you’re having fun and not hurting anyone then why should people be bothered? I can understand that if there’s children there, parents may want them to understand that being gay is OK, but that you don’t have to portray it in this kind of way.

And it really gets to me when people say “why are there children here?” It’s not a day intended for you to get wasted on cheap vodka, and give some nardy hoe a hand-job in broad daylight. It’s a celebration, you mug.

I’m not here to say who’s right and who’s wrong, we’re never going to celebrate Pride the way we used to because we don’t need it as much as we did back then – though we definitely still do need it. On the flip-side, it’s a shame that some people can’t celebrate without taking it the extra mile. So at the end of the day, it’s a matter of personal taste, and if you’re cool with being tacky af then that’s all on you.