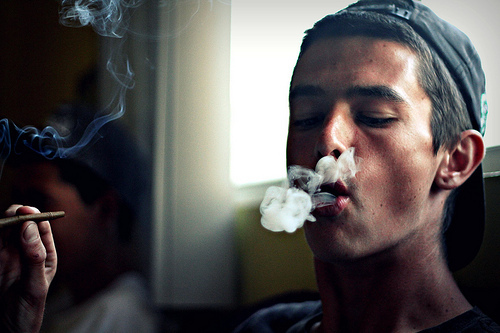 They say there’s a first for everything. And while I’ve accomplished a fair amount on first dates, I’ve surprisingly never gone on one baked out my face. I mean, why would you? Trying to impress a boy and end up ordering all the appetisers on the menu because you’ve got wicked munchies. Or your date pops to the bathroom and returns, like “where’s my cheesecake?!” and you’re sitting there with chocolate stains across your cheeks and crumbs falling onto your bloated stomach; erm, they haven’t brought it out yet…

But anyway, that being said, when the guy you’re having a midweek Mexican meal with suggests bunning up a zoot before your date, it would just be rude to say no. In fact, I actively encourage my future boyfriend to smoke pot. After he’s financially secure enough to have a hot tub, obvs.

But you can always get a sense if you’re on the same level as the other guy before the date. For example, he texts: “I’m excited to meet you, handsome”. And you almost reply: “I’m excited for Margaritas too”, so there was always the possibility that it was going to crash like Britney’s mental state. But he was a total lush as well, so we were obviously going to get on, even just as friends.

Anyway, man turns up in his Jeep and pulls out this pipe packed-full of green. A pipe? Girl, thought I was in a Cheech and Chong movie for a minute.
“Are you putting any tobacco in that?” (aka, am I gonna be able to hold a conversation).
“No” (aka, no, you are not).

He had these cheeks like Droopy the dog that made it look like he was always frowning, even when he was smiling. “Stoner-chops” I thought, before smiling to myself. He smelt of Wrigley’s gum. He wore a nice watch. I was bored already.

Driving through Hollywood – baked af – he tells me about his recent DUI. Cut to me fumbling for my seatbelt like somebody that’s just realised their iPhone isn’t in their pocket. ‘Spose if he wrote the car off and we both died, it would have been a little more interesting. Our topics of conversation ranged from all the normal things not-stoned people talk about on a first date, like murderers, Thanksgiving turkeys and mudslides. It’s like people had put in orders for their dating chit-chat, and we’d forgotten, so were left with the scraps of the conversational barrel. AMEN, that he was just as spaced, because I was unloading sacks of steaming verbal turd onto his dashboard at every red light.

Stepping out of the car, you have to do the obligatory outfit check. Well, Joan Rivers was rolling in her grave at this Fashion Police disaster. Boy was clearly stoned when he got dressed. Look, I’m not saying you have to be in an Armani suit, or have as much swag as me – I don’t expect miracles. But since when were ill-fitting cargo shorts and open-toe sandals appropriate attire for a first date? Personally, I think foot thongs are unacceptable anywhere, but I don’t wanna stare at your toenails while I’m trying to maintain an appetite. Playing footsie under the table and look like I’ve been attacked by my neighbour’s litter of kittens.

As we sat in the booth like two zombies, propped up only by the promise of food, the atmosphere began to run flat. I like my conversations with men to run ocean deep, and this one was barely a puddle. Not that I was entirely blameless, even when he did murmur the occasional random comment, I’d either be too busy picturing him as a giant burrito to reply, or I’d go off on a tangent completely unrelated to what we were originally talking about.

And just when you think you’re ratchet white trash, because you can’t even string together a thought, this hot mess with a shaved head in a boob tube and high-waisted skirt hobbles out from under one of the tables with one shoe on. She resisted security’s attempt to drag her stumbling ass to the kerb, and continued to crawl on the floor. When they asked if she was looking for something, she bluntly replied: “my wig”.

So we both ate until we were uncomfortably full and then complained about how tired we were. Sexy. We were both quite clearly wishing we’d ordered the food in, and stayed in bed. Alone. The date lasted less than an hour and a half. Which, if you’re unfamiliar with the dating norm, is the equivalent of a ‘quickie’. Frequently known as a car crash (no pun intended). Turns out he demolishes small talk as well as other vehicles.

It’s so comical when there’s so obviously no attraction there. You do the awkward “I’ll text you” dance with absolutely zero conviction, and you both know before the lie has even escaped your mouth that you’re never going to see each other again. Not even by accident. So, I thanked him for the ride – as naturally this trashy bitch don’t drive – before lingering for a moment while deciding whether to just get out the car. I lent in to give him a friendly peck on the cheek, and DON’T THINK he just offered his cheek to me. Erm, did you just pie me out when I was more interested in the Happy Hour to begin with? Was only tryna be nice.

But hey, every cloud (of marijuana smoke) has a silver lining. I may have lost two hours of my life. But I got dinner, stoned and a cocktail the size of Atlanta for $30. So you gotta pick and chose your battles…