Fagony Aunt: I Shagged My ‘Straight’ Married Boss And Now He’s Not Interested 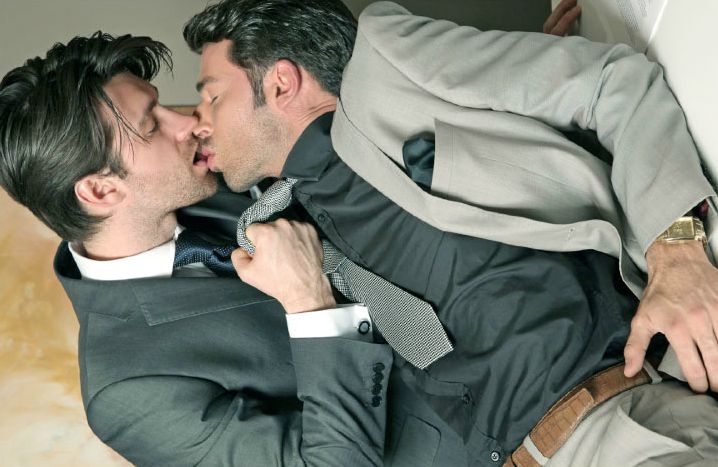 I’m straight but had a night of passionate sex with my boss. Now he says he never wants to see or speak to me again. I’m an 18-year-old guy and landed the job of my dreams working for a major men’s fashion store. My boss kept making sexual advances towards me. He’s married and in his thirties. He was really flirty and started inviting me out for drinks and meals after work, which I thoroughly enjoyed. On one of these nights, we had far too much to drink and were over the limit to drive.
He suggested getting a room for the night. The drinks continued to flow in the hotel bar and we ended up having the best sex I’ve ever had. Now he says he isn’t gay and doesn’t want to see or talk to me again. I didn’t think I was gay but I feel so confused and used. I’ve completely fallen head over heels in love with him but he just says it was a mistake.

Well haven’t you got yourself in a right old pickle? And I’m not talking about your sleazy boss. I’m struck by the fact that you refer to yourself as “straight”, despite letting your male boss defile you (enjoying it), and now chasing him around your store in an off-the-shoulder wedding dress. You say that your boss kept making sexual advances towards you – but were you bent over the photocopier in the first place?

Of course you “throughly enjoyed” being taken out for drinks and food that you didn’t pay for (well, not with money anyway). I bet you felt like Pretty Woman; although instead of designer clothes, he just bought you a cheeky Nandos. Hope you got sides with that half a peri-peri. Ironically, he was hungry for chicken too.

I have to ask, what weak-ass farmyard town do you live in where it’s a cheaper solution to get a hotel room than it is to get a taxi? Girl, you even tell me this shit took place in London with all-night buses, and you brought this on yourself. Bet yo’ minge was twitching when he mentioned getting a room. You also missed out what happened between your white wine spritzers and the sodomy. Did he lay it on you? Or were you all over him like a turtle neck from the winter collection? On your knees quicker than you can say ‘pay rise’.

My guess is that if you identified his flirtation, and still agreed to go for dinner, you knew full well that yo’ ass was the menu. And you know what, if you’d have douched, you probably would have got a promotion. But – coulda, woulda, shoulda! Time for damage limitation…

Your boss is suffering from a common symptom of post-gay-coitus called: denial. Most gay men, when they first start touching other boys willies feel a sense of guilt afterwards. Although, clearly that glass slipper fit you perfectly and you begun twirling before you even attempted to walk. It’s usually fairly mild, but I’m guessing you’ve asked him to meet your parents and to go away for a romantic weekend retreat in the Lake District, and this has pushed him to take action (aka: ask you to back the fuck up). If you’re curious what a restraining order feels like, keep messaging him, babe.

But hey, I wouldn’t take it too personally, it probably just means that the sex wasn’t as good for him as it was for you. It’s nothing to be embarrassed about; some people are just better at things like math. As for feeling “confused” and “used”, honey, I know you a sissy, but you need to man up. ‘Falling head over heels’ is for bitches that can’t walk in them. Get on Grindr and forget about that queen. She’s so far in the closet she’s got moth bites in her chest hair.

Although I do think you’re being a bit selfish, here. There’s a woman invested in a marriage with a limp-wristed Mary that just bumped uglies with his trollop assistant and you’re going on about irrelevant things like feelings.

And, how can he not see you ever again? What is he gonna walk around the office blind-folded? Falling over clothing rails and shit. Or did he fire you? If that’s the case, I say you call a lawyer, and file a suit of sexual harassment in the work place, and say that he plied you with alcohol before taking advantage, and watch the witch fall from grace. Not to mention, giving the plebs you work with something to talk about at the water cooler.

Anyway, congratulations on landing the job of your dreams, but next time keep it in your pants. You know what they say “don’t shit on your own doorstep”, and honey you just unleashed a big sloppy guiseppe on your pillow case.