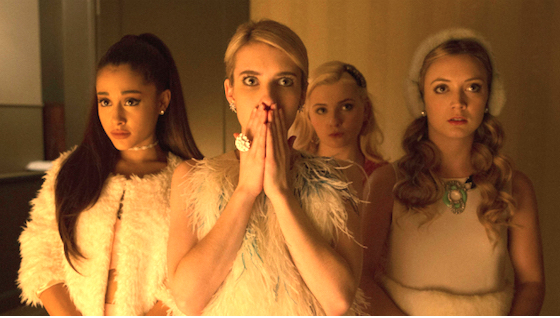 Ryan Murphy’s highly anticipated new TV horror/comedy introduces a new clique that may fill a void for those of you missing the Mean Girl‘s Plastics. The Chanels, are lead by… um, Chanel (Emma Roberts, obvs), who contently struts around campus rolling her eyes and probably back-handing teachers and noshing off football teams, while her equally rich minions follow her around, wishing they were Queen B. It does sound right up our street, to be fair. Check out the character intro’s below.

What we can learn from these videos…
> They’re all bitches (no shit).
> They’re all caked in make-up like it’s a Gypsy Wedding or something.
> There’s lots of comedy

It’s described as Mean Girls meets Texas Chainsaw Massacre. Those are some pretty big names y’all gotta live up to! Let’s hope they do it justice, though we’re sure with Ryan Murphy behind we’ll be totally hooked (for the first three seasons anyway…).