An Open Letter To Gay Men And Their Bodies 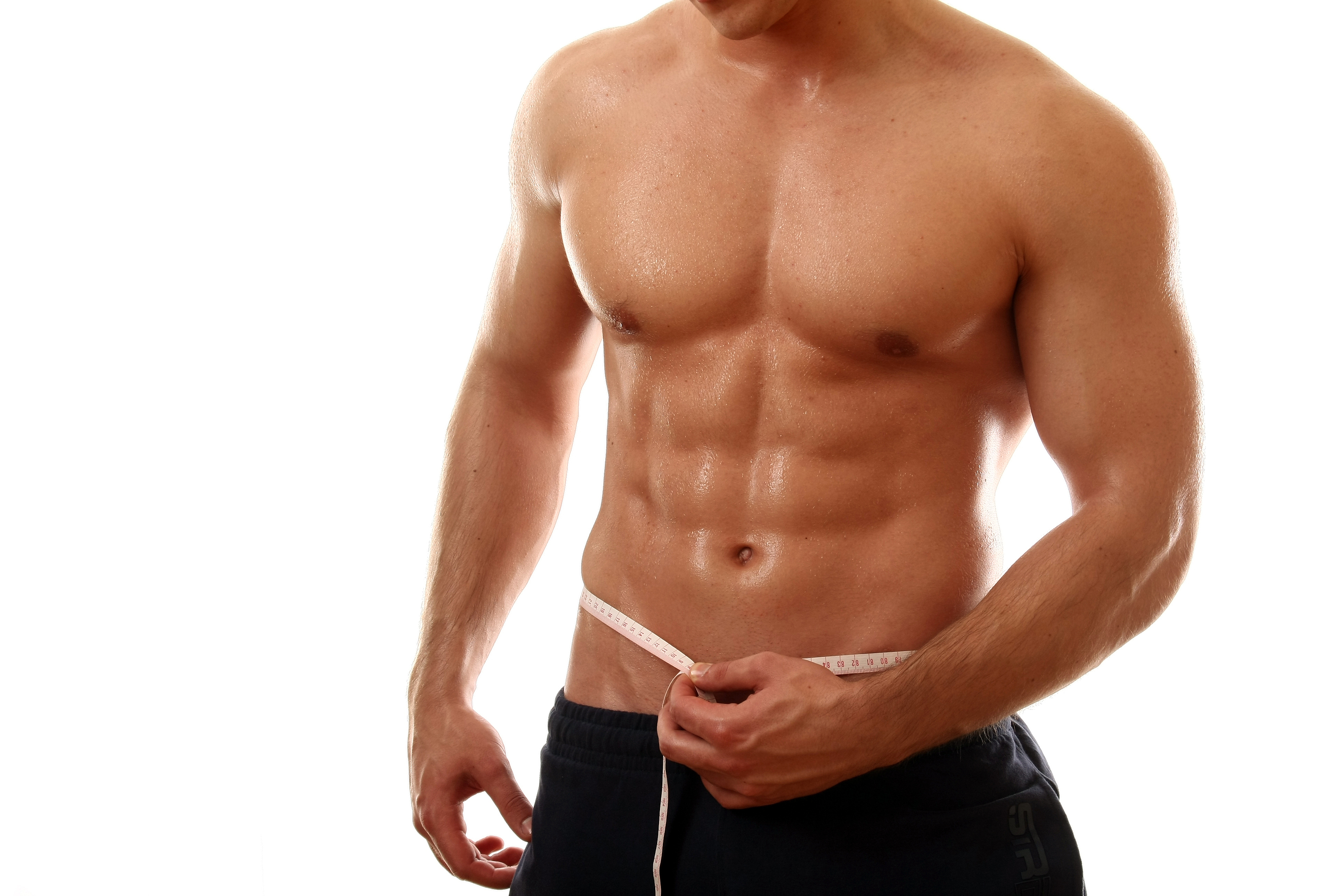 It’s become abundantantly clear that our bodies, is quite a fiery topic for many of us. Perhaps that’s because, like teenage girls, our relationship with our bodies is deluded, obsessive, unhealthy and based on the opinions of boys we wanna bang. Not all gay men, of course.
But there are countless numbers of us that have mild, albeit subconscious, forms of eating disorders. Whether that’s not eating for three days because we’re too high to butter some bread, and then yamming down pizza and chicken wings until we can’t move; or pushing ourselves extra hard at the gym because body dismorphia leads us to believe we’re still too thin; or comfort eating because our weight is getting us down. They can all be viscous cycles.
But, the question is why? Do gay men single out those that don’t fit the shallow stereotype? Are we brain-washed by the media? Attitude magazine recently came under fire for posting an article that raised these exact questions… 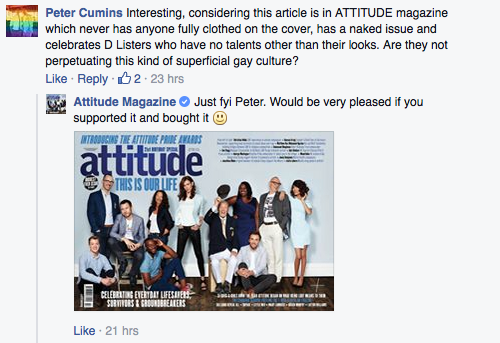 What you have to bare in mind is, Attitude magazine are a business. Businesses have to cater to their audiences. And I think it goes without saying that their sales might dip a little if they put James Corden in a pair Rufskin speedos on the cover. Let’s not be stupid. Besides, these men and their bodies – which, might I add – they have probably worked pretty hard for, aren’t exactly promoting an unhealthy lifestyle. And there’s nothing sinful about being healthy and looking good. OK, some of these men may be taking more extreme measures to look this way, but it’s not quite a Size 0 epidemic.
Shall we put overweight people on the cover of all magazines just so we can feel better about ourselves? If we’re gonna have a pop at Attitude, we might as well take every magazine off every shelf.

Point taken, that perhaps the ‘Naked Issue’ isn’t a huge stretch from the 90% naked issues that come out the other 10 months of the year (minus the Style Issue) – but sex sells – and not just within the gay community.
Shall we all start making picket signs and hanging around Westminster demanding that we be accepted for our normal bodies? Urgh, no thanks – I’ve got a life. The thing is, you find shallow people in all walks of life. Everybody has a type. And the reality of it is, if he’s obsessed with the exterior and makes you feel inferior, he’s not the one for you.

Everyone has a list of priorities when it comes to a potential partner, personally, an attractive face and a sense of humour rate higher than protein farts and a third leg. And that’s probably something we just have to accept. Changing the covers of magazines isn’t going to stop size queens clucking for lats wider than a vending machine. And it seems that everyday gay men’s attitudes are more of an issue than the media.

All I’m saying is, I ain’t listening to you bitch about what a dickhead the latest guy you’re seeing is, when you’ve put personality half-way down the list of desirable traits, after the important shit; like v-lines, broad shoulders and girth, of course. Perhaps this is why gay men struggle to find lasting love, because there’s always a more hung bloke in the next shower cubicle. Because there’s a countless amount of vain queens, searching for even vainer kings. Let’s face it, nobody had an open-relationship because they want to get their hands all over another man’s intelligent conversation, did they?

If you search in shallow waters, all you will find is pebbles… Fish a little deeper and you may snag a catch. 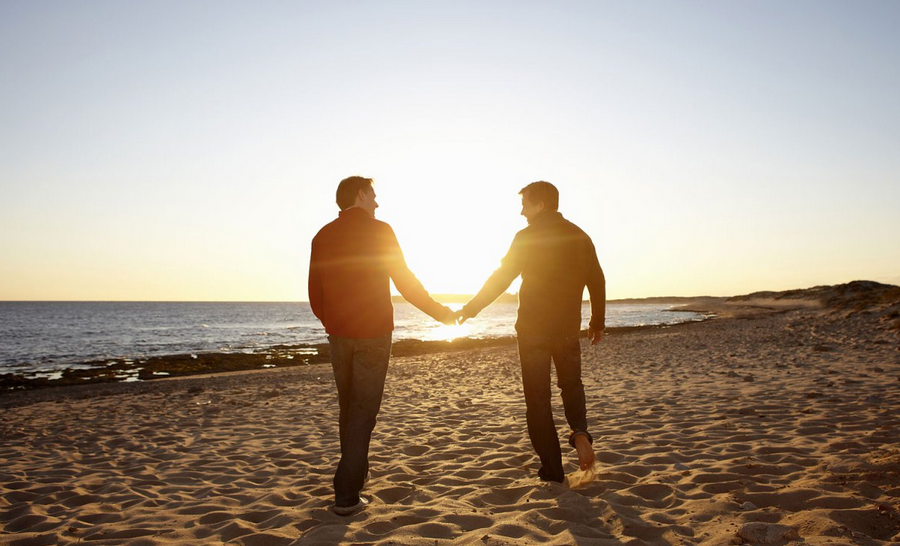 But rather than standing around, begrudging the opinions of those that bow down to biceps and praise penis size, maybe you should ask yourself, why do you really care? Is it because you want a six pack? Because you want to be desired by muscley men?

When I meet a man so cotton-mouthed by another’s bulge or six pack that I have to offer him a glass of water before he can continue to talk, I feel pity; it’s a turn-off. Who cares if he has the body of an Adonis – if he doesn’t get my jokes – those thick thighs can keep walking.

But maybe that’s just from the perspective of somebody that finds spooning with 2% body fat, as pleasant as hugging a sack of rocks. Or seeing traps on top of traps, and wondering if it’s a tumour. And what’s with all those protruding veins? If I wanted to play guitar, I’d take lessons. And I’m not hitting out at all gym rats, I’m slightly addicted myself; sometimes training twice a day, not to mention swallowing fat burners like Smarties. But I’m doing that for me. So as long as you’re achieving the body that you want, and not what you think other men want – good for you.

As long as there are gyms, there will be thirsty bitches that require you to look a certain way – whether you conform or not – is up to you. There’s nothing wrong with having a good body, but get it for the right reasons (sidebar: showing an ex what their missing is also a valid reason). And when you do, don’t look down on people that look like you used to.