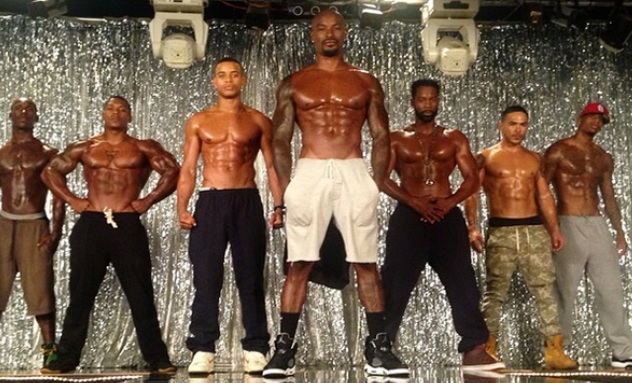 Damn, girl! It just got a whole lotter hotter up in her e. Pass my fan, dolls. Tyson Beckford and young stunner Robert Ri’chard are getting their kit off in the tantalising trailer for Chocolate City where the pair play competitive strippers in a New York nightclub. To say that this film bares a passing resemblance to Magic Mike would be an understatement. They’ve jacked that idea, ran and didn’t look back. And how they’ve even thrown shade via the film’s tagline: “Are You Ready For The Real Magic?”

The REAL magic you know! As if Channing Tatum and Matt Bomer are just pedestrians when it comes to getting naked. You gotta admire this ballsy move, but realistically, with the hype surrounding Magic Mike XXL, it won’t ever be able to compete unless it has some amazing script. And style over substance can easily become an issue when you’re dealing with so many near-naked men. Otherwise it will just be a complete rip-off with less known actors.

It’s a ballsy move to come for a franchise that’s already so huge, BUT the music on the trailer is peak (which is always a good start), and it undoubtedly seems a lot darker/edgier – so if there’s some sharp dramatic twists while all this pussy-teasing is taking place it could possibly work!

Will you be watching it Cock Flock?