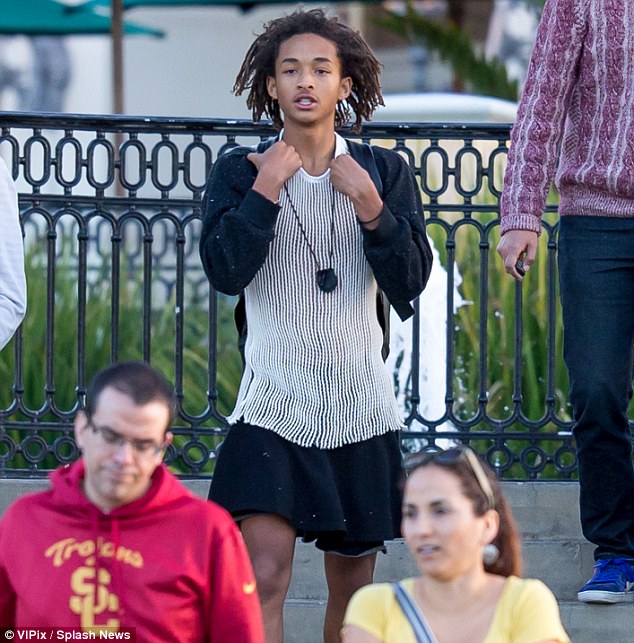 See what happens when you grow up with sex-swinging bisexuals as parents? The world doesn’t end. You just produce cool kids. Jaden Smith, lovechild of Will Smith and Jada Pinkett couldn’t give any less fucks as he rocked this skirt while in Calabalas. Imagine a boy tried to bowl around in a skirt when you was 16, chances are he’d of got bullied – I love that this kid is making it cool.

TRUE, he parents are one of the biggest, richiest, couples on the planet, so firstly ain’t nobody gonna be able to put this boy down if they tried, but secondly, even if they did – he’s like rolling his eyes while he sashays round his multi-million dollar mansion in a skirt. There was a lot of speculation about Jaden’s sexuality last month when a cryptic tweet he sent to Tyler The Creator (I know, no idea who he is, either), which read:

“I Think Im In Love With You, I Don’t Know I’m Still Figuring It Out But In The Meantime, Happy Birthday.”

So while the rumours have been denied, it’s not known whether Jaden is gay – but really though – it doesn’t matter. Whether he’s gay or straight, let him live and let him do it in the clothes he feels comfortable. And to be fair, respect to him for being this publicly open about his “experimentation”, as reliable source Daily Mail puts it, but it’s not the first time we’ve seen androgyny. It’s been going on for centuries. So people acting like this is a big deal need to get a reality check.

But, like I said, props to Jaden for werqing this like it ain’t nobody’s business. ‘Cause it’s not.