Fagony Aunt Responds To Giorgio Armani: “Be Gay, But Don’t Dress It”. 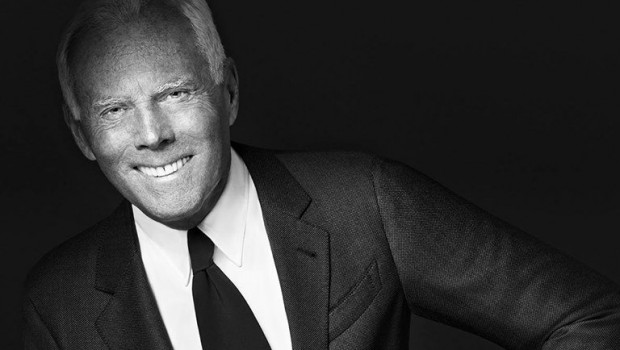 Giorgio Armani has come out with some controversial comments regarding the way gay men dress. In an interview with Sunday Times Magazine, the fashion mogul has said: “A homosexual man is a man 100%. He does not need to dress homosexual,” before continuing, “When homosexuality is exhibited to the extreme — to say, ‘Ah, you know I’m homosexual,’ — that has nothing to do with me. A man has to be a man.”

But he wasn’t quite finished yet, as muscle Marys became the next group of gay men under fire as he stated: “I don’t like muscle boy. Not too much gym! I like somebody healthy, somebody solid, who looks after his body but doesn’t use his muscles too much.”

And of course, ageing women too: “I prefer to look at a natural woman. A woman should be courageous to become older, not be desperate to look younger than her age”. Branding cosmetic surgery “idiocy”.

Well, clearly Fagony Aunt couldn’t reign her tongue in on this one:

Pardon me, Giorgia Armani – but are you not a shit-stabber yourself? Why, of course you are. And do you know that the only thing worse than a homophobe, is a gay homophobe. Yes, they exist and you are a prime example. You may as well mince back into your closet and have a hush-hush-fumble with Russell ‘too butch’ Tovey. *Rolls eyes*

Sure, you may not find men that dress femininely attractive – but as a gay man yourself you shouldn’t be putting down other gay men for how they dress; we’re all on the same team. You’d think being 124-years-old you’d have learned that by now. I, personally, think a man should be a man, and not a tangerine – but you don’t see me hurling insults at you. Or Donatella. And like you say of women, perhaps “a man should be courageous to be gay, not desperate to be straight”.

And honey, I’mma let you in on a little secret. Your clothes are gay. Very gay. In fact, I’m willing to bet that at least half of your male consumers have had a cock up their arse – on at least in their gob – at some point. Do you really think the majority of the straight population wear briefs that use less fabric than a pocket square? No, babes. Do you think the majority of the straight men spend the amount you charge for a pair of briefs? Of course not. And let’s not even discuss the Milan S/S ’08 collection (or the other countless flamboyant designs your brand has marketed) where models wore off-the-shoulder cardigans and mesh vests – how very heterosexual of you.

And then look at Miss Thang over here, throwing shade to the muscle queens. It’s all about personal preference, and considering this is your ever-so-masculine swimwear: 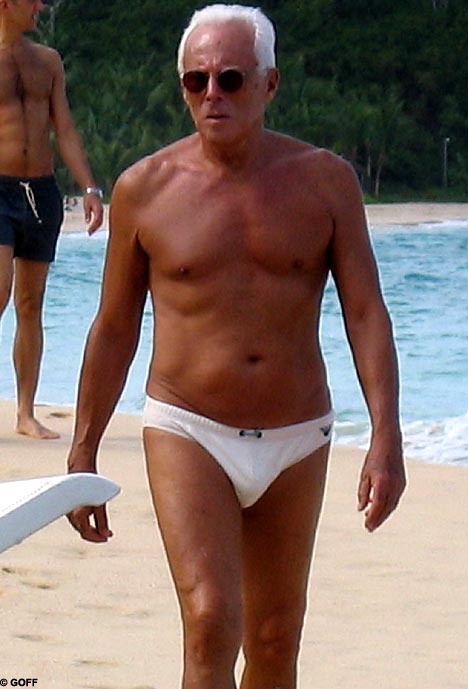 I’d advise you not to be so picky with yours. Honey, anyone you date that you didn’t meet at the retirement home is after your money, or their 15 seconds – and I don’t mean in the bedroom.

As for women desperate to look younger not being an attractive feat – you know what else is unattractive? A man who’s so desperate for a tan he looks like skin cancer with a white tuppee. Cosmetic surgery may be shallow (which evidentially, you have an abundance of knowledge on) but “idiocy” is perhaps a bit strong. Especially considering if you’d of had some, you might not look like you’ve been dipped in a deep fat frier.

Girl, nobody builds a billion dollar empire with an empty head – surely there is a brain in there somewhere, use it.