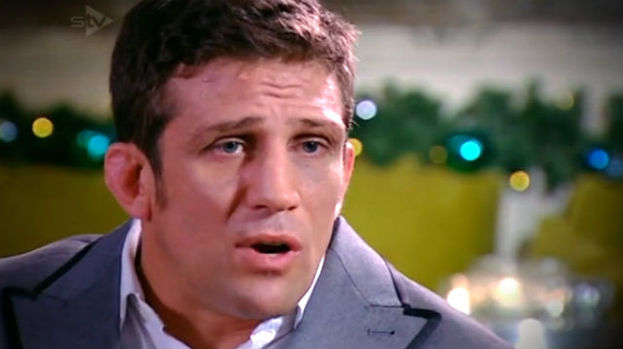 I’m sure you’ve seen the recent revelations my bitter ex Katie Price has been making on Celebrity Big Brother. I dunno why she feels the need to do that, doesn’t she get enough publicity without dragging my name through the dirt? I expected her to shamelessly divulge details of our relationship, but even this is low. I’m actually disappointed, I was rooting for ‘er. When will she grow up?

I can call you that now, right? See as you clearly love dick as much as the rest of us. Firstly, can I just say – how good is your ex-wife looking? Anyway, yes I saw the footage, snuggled up on my sofa with a bottle of cherry Lambrini, that slice of truth cake was so delicious I didn’t even need my usual side of caviar.

As a former cage fighter, I’m sure you’ve taken a few blows in your time, but look how she knocked you out and you weren’t even in the same postcode. Don’t berate her for “feeling the need” to discuss your sex life, it’s just what us girls (and Kavanah) do. Unfortunately, yours was on national television. But then again, so was your relationship.

And to be fair, why would she refrain from gossiping? She doesn’t owe you anything, she was the one with a shitty strap-on at the end of the relationship. And seen as you crave attention as much as a finger on your prostate, I thought you’d of been glad of the publicity? Let’s face it, it’s the most press you’ve had since another reality TV queen threw you out like stale Chinese food.

I don’t think it’s appropriate to discuss anything being dragged through the dirt… Unless we’re talking about Miss Price’s fingernails, of course. But while we’re on the subject, honey the only thing that was dragging was you and Kelly Maloney down the Mecca Bingo on a Saturday night. #GirlsGoneWild

And I feel you are mistaking a “shameless divulging” for a much more straight-forward case of shade. And you thought she abused you in the bedroom. People are very quick to throw around the word “low” when it comes to an insult. But what they forget is that it’s not low if it’s true. I mean, can you imagine how mortified she felt when you sashayed up to her book launch in the kind of tragic drag ensemble I’ve only ever seen at Gran Canaria Pride.

I understand you’re disappointed, but look on the plus side, at least now your current girl knows what you’re into. So maybe she’ll be open-minded to letting Roxanne (fabulous name btw) come out to play. I mean, The One should love you warts and all! Use this as an opportunity to embrace who you are. Next time you’re getting freaky with Nikki in the shower, try dropping the soap and see where it leads.

As for rooting for her, I think you were the only one ever getting rooted. But hey, I’m not here to bottom-shame you. The Pricey did that already. Katie may never grow up babe, and as long as she continues using the same botox and fillers, she don’t have to.

Anyway, I g2g, the next episode is on. Probs bump into you at Trannyshack init.

P.S. Love that you’re still referring to yourself as a cage fighter. The only thing you’re fighting boo is the closet.