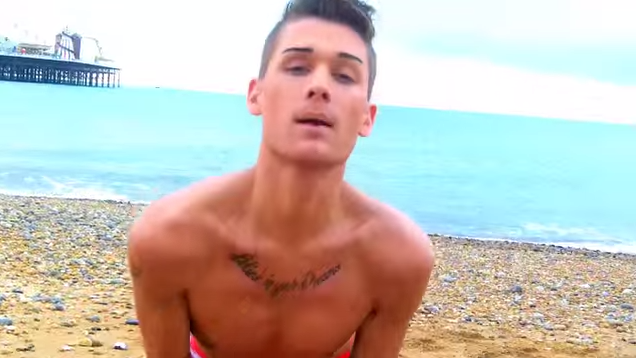 Danny Gogo is taking the internet by storm with his latest music video ‘Waiting For You’. Seriously, where has he been all these years? It’s about time that we had a celebrity – especially one with such vocal talent – that didn’t represent a total cliché of what gay men are. And what’s more – what an absolute stud muffin!

We can’t work out what is sexier, Danny Go-home flailing around on Brighton beach like a trout on a hook or sprawled across the floor tiled with covers of G Scene magazine. The video opens stating his name – as every video for an international superstar does. And for a newcomer, he’s really nailed the cinematography and pyrotechnics of the music industry – I mean he’s really pushed the boat on that one. What with the violent auto-tuning, impressive video effects of hash tagging (because he’s obviously going to start a Twitter trend when the single gets picked up and released on iTunes), to the elegant wardrobe choices (Christian Dior take note), to the highly-skilled make-up artist. We have serious brow-evny…

The lyrical genius behind the song has been related to respected artists such as Paris Hilton, while the sophisticated dance moves would put even the Royal School of ballet to shame. As the masterpiece draws to a close, Danny NoNo glances over his shoulder and gives his best ‘all natural totally fake’ giggle. Which has the markings of legendary actress Jennifer Lopez. We can’t wait ’til Danny snags an inevitable record deal and no doubt surpass the success of global superstars Lady Lloyd and Dusty O.

**Side note: We also take our hats off to the videographer for the smooth/steady filming. It’s hard to do when you’re in absolute stitches.

If, like us, you can’t stop watching such raw and emotional performances. Why not check out his production of Cheryl Cole’s ‘Call My Name’. The poor lass must be kicking herself after she saw his concept. But since seeing the video it’s reported that Cheryl’s people are in talks with Gogo’s people about him working on the choreography for her new track.

Then there’s his production of Christina Aguilera’s ‘Your Body’ – Oooh girl, you better watch your back with this one! You can tell that Danny Gogo, like all popstars has gone up in the world with product placement in his videos – writhing around in high end make-up brands. Although his re-creation of housewife chic is uncanny. He’s clearly proven he can sing, dance and mime better than anyone in the business. We predict Hollywood in no time! Beyoncé, you better hold on to that crown tight…

Other posts you might like:
>> 10 People You Meet On The Gay Scene
>> ‘Look Up’: The Most Powerful Video You May Have Ever Seen
>> EXCLUSIVE: Queens of Pop 2013 Round-Up