DATING TALES: From Out Of The Shadows 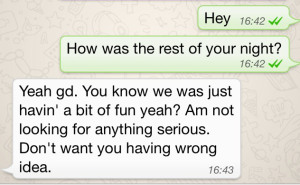 Like for real? Chill bae. Don’t get it twisted, he was fine, but he was one of those guys that liked to act like he was hot city shit, but everybody knows she come from some next derelict county like Buckenham-Oxford-Bridge-On-Trent. You know, one of those people that begs swagger, but only the sheep buy it… Basically a Rita Ora.

All I done was ask how you were – which post-oral sex I don’t think is that forward – and you felt the need to start throwing pies. Can’t you just behave like a normal gay person and pretend it never happened? Especially after you were the one that wooed me into the cupboard first of all.

Anyway, my friends and I recently took a trip to the newly refurbished Shadow Lounge – which FYI – looks very slick. Unlike a certain blast from the past that scuttles across the dance floor and taps me on the shoulder while I’m cutting a rug. My “it’s so good to see you” game was on point. Cut to me serving Oscar-worthy reactions…

As if showing up at my weekend hot spot and interrupting me during my favourite song wasn’t enough, he then has the audacity to introduce his new boyfriend to me. Erm, what makes you think I wanna meet my downgrade? It would be like asking Meryl Streep if she wants to meet Kristen Stewart. No babe. It would be like trading your new iPhone 6 in for a Tamagotchi. Or choosing to drive a Fiat Punto over a Lambourgini. Lets all settle for engagement rings with a lump of coal instead of a diamond too. *Shudder*

I might sound like I’m a bitter bitch, but we’d had our moment, and mugging me off over an instant messaging app was uncalled for. So were introductions to his new piece of meat really necessary?

As if interrupting me during my favourite song wasn’t enough, he proceeds to drape himself over his new man like cheap melted cheese on moudly nachos. Have some decorum, this was the Shadow Lounge, not Fitladz. Was he trying to make me jealous?

Pah! Is that all you got bitch?! Some lousy tongue action with a knock-off Brazilian? Girl, you weak. Don’t try be a ratchet hoe when you ain’t one. I lipsed a brother with no teeth for half a pill one time… now that’s ratchet.

What was he even doing here? He wouldn’t know good taste if it held him down and penetrated him, let alone a decent club. I’d managed to avoid seeing him for so long exactly because of that reason. But I suppose even the trendiest clubs can’t tell a goat in sheep’s clothing. It’s like, girl, it don’t matter how many bouji bars you go to, or how many Snapbacks you wear at a jolty angle – you will always be a scrub without game. And just in case any of you are unsure; slag does not = swag. It’s like a pigeon putting on some colourful outfit and pretending it’s a peacock.

So I sniggered as he groped the missing link in JLS styling. What else could I do at such a feeble and laughable attempt to make me jeal? Lol, that attempt had less to show for itself than Megan Fox’s acting capabilities. I’m literally SO green with envy that you managed to bag a greasy kebab shop worker.

So did I giggle to myself and glide out of the club with the class that any respectable person would? Of course I fucking didn’t. He’d have thought he’d of won. No, I grabbed his fittest mate and thrust my tongue down his neck like Gene Simmonds. Of course the club was filled with hot looking guys, but that wouldn’t have satisfied my desire for payback. Wait, maybe this was a competition in who was more ratchet. Whatever Felicia, either way there weren’t no contest.