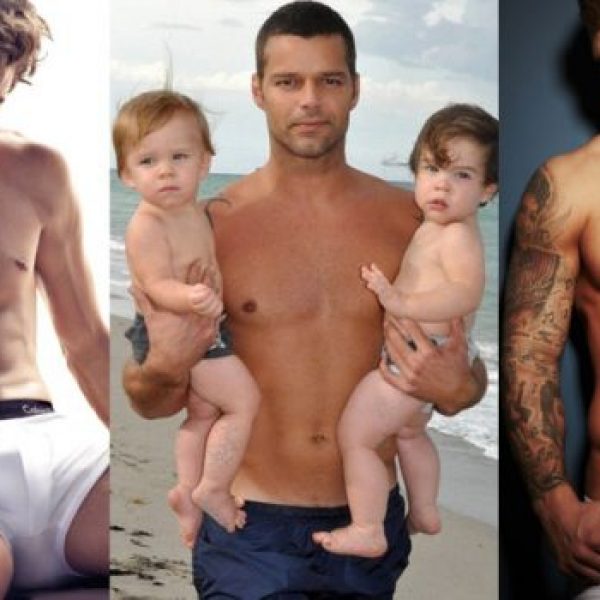 DILFs are so in right now. What is it about a man taking care of his little offspring that makes him ten times hotter? Is it because our inner bride loves that he’s family orientated? His ability to prove he can be responsible? Or the notions it gives us of finally giving up the dating game and settling down with Mr. Right? All of the above, probably.

And sure it’s not such a pretty picture when the little shit is stamping on your new white Air Force, or throwing up down your fave Lyle & Scott polo. But let’s forget that for now, and just ogle the world’s hottest daddies…

He was recently named the third sexiest man in the world according to Attitude Magazine – and we’re sure that has absolutely nothing to do with his allergy to clothes. Osborne became a dad to his first child Teddy in December 2013.

He’ll be playing Christian Grey in the new 50 Shades movie, as if Dornan didn’t have our knickers wet enough. He also became a first-time dad in December to a daughter. A man that will leave you chained up in the bedroom while he changes nappies is one we could get on board with.

Probably one of the world’s most famous DILFs, we like a bit of Beckham in his kit as well as out of it. He has four kids, so can handle responsibility, but more importantly he’s great with balls. And he could handle you being a total fashionista too.

Hawke, like Beckham, is the older, brooding type and also has a whole litter of kids. And if you ever need a break from it all, we have a spare room…

Jude Law is one of Britain’s most notable DILFs… well, the nanny seemed to think so at least. And to be fair, we agree. Not that we condone his actions is any way shape or form, but we are looking for a job as a baby-sitter…

Brad Pitt is the father to countless children. Seriously, fuck knows how many he has now. All I know is if a man looks that good without a shirt and can dote on that many kids, we know why Angelina stole him from Jennifer.

Just picture it, after putting the kids to bed, you wander off to the bedroom and order him to put on that Batman costume. *Dribble*

Every man has pros and cons. His pros include saving the world on multiple occassions for his movies which is totally dream-worthy, but his cons include raising Willow Smith to bring out the world’s most annoying song (and yet we still like it). We’ve also heard that Will Smith and Jada Pinkett have an open marriage. Well, in that case, our number is 0044…

Hugh Jackman caters to those that have a slightly more mature/burly taste. Playing Wolverine he’s renowned for having a ripped physique and hairy chest… Oh yeah, and he’s a dad too. OK, she can sit on his shoulders and we’ll sit on his face.

He wowed the world as Mike the stripper, but let me tell you the only “magic” that was going was in our pants. *Insert pun about about a wand* He became a father to daughter Everley in June last year.

He’s the Holy Grail of gay dads (along with Neil Patrick Harris, but who isn’t quite as sexy). He has two twin sons with his partner. Now this makes us wanna settle down!

Most famous for his role in the Bourne trilogy, Damon has that all-American look that us British just lap up. Talking of laps, come sit on ours. We suspect he’ll have a couple of heartbreakers on his hands with his two daughters.

Phillippe had our heart since Cruel Intentions in the mid 90s, and he’s aged immaculately. Reece Witherspoon had a good few years with that, mhmm! He always looks totes cute when he’s papped with his son or daughter too.