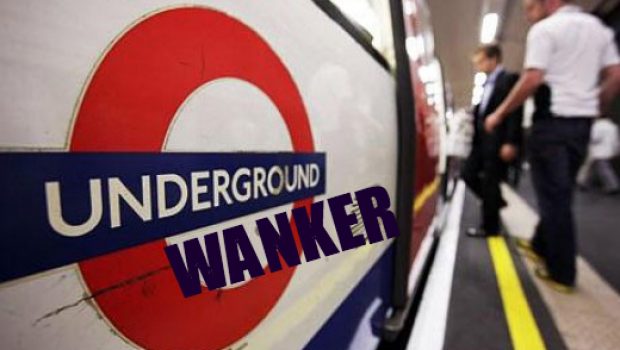 The 10 Wankiest Things People Do On The Tube

Whether it’s a drunken lout swinging from the poles, that tall thin bloke poking his beak over your Metro or somebody going under on the DLR, we’ve all encountered – or at the very least – witnessed, somebody with wanky tube etiquette, here’s just 10 we can’t stand…

Yes, life in fast-paced. Tell us something we don’t know, but if you can’t eat food with one hand then you definitely shouldn’t be eating it at 5pm on the Northern Line. Don’t even get me started on the ones that break out their Tupperware of embarrassment. Some woman got on my train the other day eating sweetcorn, out of a can, with a fork. It was stranger than a Sarah Jessica Parker’s wrinkly hands. And those nappy fuckers eating whatever it is that smells like peppered abortion. Stop.

Talking loudly on the phone

Omg did you hear that sloshy Sandra is up the duff? Or how bout loose Linda caught crabs? What about surgical Sarah and her botch tit job? No we didn’t. And nor do we care to. That also applies to any shit you spouting bout your baby father and any D list names you feel it’s imperative to drop in the height of rush hour. Go home. That’s where the dirty laundry is – and where it should be kept.

Just, really? They say that you can find love anywhere and that you will when you least expect it. But that hardly means on the Overground when you’re a sleazy street vendor trying to get your end away with a beautiful fashion student. It’s actually really unsavoury, and awkward to listen to. Save your cheesy chat ups for Plenty of Fish and if we require the cringe-worthy conversations of two strangers, we’ll tune in to First Dates.

Pushing to get on

Even ‘Busy Drag Queen’ wasn’t in this much of a rush. She’d scurry past a woman choking on a chicken bone, but even she knows trying to get on a train before people have gotten off is just uncouth. Then you got the not-exactly-skinny people that will squeeze in tighter than a Sharon Osborne face lift. Will it be Armageddon if you wait 2 minutes for the next train out of Canary Wharf?

Seriously the most pointless thing since Snooki. Why, when there’s an entire carriage of empty seats would you choose to sit on top of someone? It’s bad enough being on ‘public’ transport, rather than in a private car, but the last thing I want is a lap dance from a middle-aged German woman. If I wanted to be ridden, I’d turn on Grindr. And if you’re an over-baring mother with an over-talkative kid, you’ll get cut.

By wearing a hench fuck off rucksack on your back on a crowded carriage, you’re effectively taking up the space of two people. You might say the same about the over weight, but they can hardly remove their spare tyre and carry it in their hand. You’re going to work, not the Himalayas. Add to that the amount of people you hit without even realising definitely makes you a major tube wanker. It’s not hard, just do what Ciara does when she wears a skirt; tuck it between your legs.

Being a judgey woman

Don’t even give me that these-heels-hurt side-eye, I ain’t giving up my seat for you. E’rrbody knows that Tube Politics mean unless you’re pregnant (after 7 months), disabled (from the waist down) or old (70+), you’re not entitled to it. And even then that’s a push. This seat belongs to whoever gets there first. You fought for equality, and now you must fit for your right to sit. Otherwise what next, giving up seats for men that wear dresses? Hysteria.

We covered this briefly in last weeks ‘Hot or Not’, but regardless as to whether someone is profusely sweating out last night’s Mephedrone or are simple just mutton dressed as goat – staring is rude. Either keep your head down or cuss a bitch out on one of your social networks, it’s the polite thing to do.

Like, babes, if you’re not signed to a label, there’s probably a reason, i.e. you sound like a walrus being skinned alive. And this is totally the 21st Centruy, make a YouTube video?

Most people using the Central Line want to tear their fucking hair out, it’s totally natural, like sleeping with someone on the first date or telling your friends they look fat so you feel better about yourself. But is that justification to mess up other people’s days? Absolutely not. Take a leaf out of the 90s and get yourself a box of Oxycontin or a packet of razor blades… or better yet – a therapist.

Other posts you might like:
>> 7 Of The Most Annoying Things In The World (EVER)
>> More Embarrassed Than An A-List Wardrobe Malfunction
>> The Nightmare Night Bus

CocktailsCocktalk March 26, 2014 Just for Fun london undergroundwankerworst things to do on the tube