EXCLUSIVE: Getting Iggy With It

We saw you last night at the iTunes festival – you killed it.
Thank you!

I was actually gonna wear the same dress, so it’s lucky I didn’t because that could have been really embarrassing.
[laughs].

So your new single is called ‘Change Your Life’. How has your life changed since becoming famous?
Probably that I have a lot less say in my own life! [laughs] That’s probably the biggest thing.

And you speak a lot about leaving home at sixteen – what spurred that decision for you?
Just wanting to fit in somewhere in life, and not feeling like I did where I was from.

Do you have any advice for other young people feeling the same?
I wouldn’t tell you to run away from home! [laughs]. I would just say that it always gets better, and it does matter whatever it is you like – how strange – there’s always other people in the world that like things just as strange as you. Sometimes it just takes time to find those people and to find the place that you fit, but everyone has a place.

Do you feel you were lucky to find that place?
Erm, no I don’t think it’s luck – I think it’s just patience.

So where did the name Iggy Azalea come from?
It was my dog’s name.

Oh really! And why did you decide to take that on?
I just really like my dog.

Aww. Now, I love the video for ‘Change Your Life’ – how did you come up with the concept for it?
It was based on the movie Showgirls, I really love the movie – it’s one of my favourite films. I love Las Vegas and the song had a big show sounding feel, and I wanted to be able to incorporate dancing into a pop music video, and I thought about Vegas show reviews that incorporate dancing and that’s my favourite of all the Las Vegas themed movies.

The outfits are hot too – who’s your style icon?
Erm… I love Anna Karina – she’s my favourite in the world.

Your body is slammin! How do you stay so well in shape?
I perform almost everyday, so I suppose I do a lot of cardio.

Yeah ‘cause you know that tiny waist with the long curvaceous legs – I been tryna get that body for years girl.
[laughs]. Yeah a lot of cardio and spending it up.

So, let’s talk performing! You’re at G-A-Y next month, and you’ve been there before for ‘Work’, what’s your favourite thing about performing there?
I think it’s a great energy, loads of energy. And it’s one of the only clubs I’ve performed at that actually has a proper stage.

A track with Missy would be hot.
Yeah, that would be really good.

We need to make this happen.
I’ve been trying to make it happen for years.

Oh you don’t drink?! Well, that’s how you got such a tiny waist girl…
[laughs] Well yeah that’s a lot of extra calories in that.

[laughs] And I think I know the answer to this one, but… handbags or heels?
That’s really tough, but shoes!

If you were on death row, what would your last meal be?
Probably, ribs and macaroni and cheese and baked beans.

And as a model and singer, would you rather judge Australia’s Next Top Model or X Factor?
X Factor. I just think it would be more fun!

That’s the end of the quick fire! I’ll see you at Heaven in a couple weeks.
Ah brilliant, I’m really looking forward to it. I’m really excited.

And we’ll twerk.
[laughs] Yeah we’ll have a twerk. 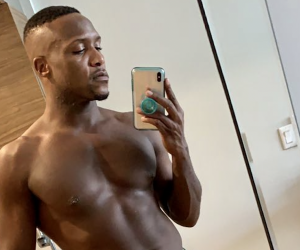