EXCLUSIVE: If You Seek A*M*E!

New girl on the block, A*M*E is the talk of everyone right now! A girl from my own ends (Lew’shum – get me?) A*M*E first wowed me at Notting Hill Arts Club a few weeks ago with a Live performance, and band. For a 17 year old (or a performer of any age), she KILLED IT. I think I’ve got a new fave musician…

Here’s the interview I did with the starlet this week – also in this weeks QX Magazine.

So, I saw you a couple of weeks ago at Notting Hill Arts Club… you’re quite the performer!
Thank You!

Were you taught to dance and have such a stage presence, or does that just come natural to you?
Well, I don’t wanna say that it comes naturally, because then I’m gonna sound like such a big ‘ead. I learnt ballet from the age of eight, but I’d never done any commercial dancing, so I kind of picked it up when I did GCSE dance, and then learnt the basics – and then the rest is kind of choreographed I guess. But on stage it’s obviously not so choreographed…

It looked natural, it didn’t look choreographed! Let’s talk about your new single ‘Play The Game Boy’, did you write it?
Yeah, I wrote it with some producers called Elektrik. It’s just flipping the script a bit, and just saying that men can play games, and so can women. Although not being so heavy about it though, just keeping it light-hearted.

That’s how you keep them in check!
Yeah! [laughs] And it has the rap, and the all the other little quirky little things in it. So yeah, just saying that you can play the game, and so can I!

You’ve recently been signed to Gary Barlow’s label, Future Records…
I had four demos, and my manager went around to different labels, and was like ‘this is my artist, what do you think of her and her music?’. And luckily for me, a lot of people, including Gary Barlow and his team, were interested. So, yeah, I had a meeting with Gary and his team, and so it just kind of went from there.

Did you consciously decide to do it all yourself, and not to go down the X Factor route?
I never, ever wanted to do the TV show thing, I always wanted to do it the harder way. I wanted to graft, so that was never really an option for me.

I was going to ask you if you’d ever performed to an audience of that size before, being quite new to the circuit?
I have… But I just have a feeling that G-A-Y is going to be so much more different.

Who’s your style icon?
Rihanna, amongst people like Twiggy, I dunno – everyone, well, I can’t say everyone, but all the greats, if that makes sense? And all the fashion icons, as well as like underground ones that people haven’t heard of… I don’t think I have like a set icon, I just love good fashion.

Yeah, because we picked up on the Year Zero stuff in your video…
Yeah, it’s awesome! They’ve got some really nice bits and bobs in there. So, I like to throw some of their stuff into what I like.

A lot of your tracks so far have been quite upbeat so far. Can we expect any ballads on your new album?
Yes! For sure, I mean, it can’t all be raving music, there will be some. And although it’s quite up tempo, I’ve recently added a track to my set called ‘Hear Me Out’, and that’s, I guess, sort of a ballad-y hit compared to the rest of the songs that I do in the set. There are like hardcore ballads that I’ve recorded, so hopefully they do make it.But there’ll be a ballad or two on the new album for sure.

When can we expect your album?
I’m thinking, like, June, or July. Well, that’s like the talks that we’re having now. But nothing’s set in stone yet, so… 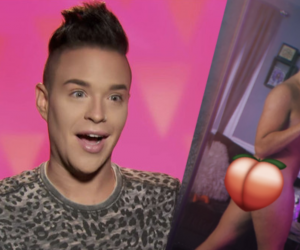